Here is how The New York Times put these mass shootings into perspective in its report on March 22:

Until that shooting in Atlanta, it had been a year since there had been a large-scale shooting in a public place. In 2018, the year that a gunman killed 17 people and injured 17 others at Marjory Stoneman Douglas High School in Parkland, Fla., there were 10 mass shootings where four or more people were killed in a public setting.

The following year, when a gunman targeting Latinos in El Paso, Texas, killed 22 people, there were nine.

For the record, though, here is my take on the debate on whether the Atlanta shootings constitute a hate crime:

That said, please forgive me if my title seems too glib or insensitive. It’s just my way of decrying the utterly useless way we continually respond to these mass shootings. And this is so especially with respect to the way politicians do.

I mean, did you see the “theater” on display in the US Senate yesterday?  There was Sen. Ted Cruz, the Chicken-Little defender of the Second Amendment, screaming the NRA’s familiar rallying cry about liberals using mass murder as a pretext to take away guns from law abiding citizens. And there was Sen. Richard Blumenthal – earnestly pleading for Cruz to seriously consider some modest gun-safety reforms, as if he were Charlie Brown pleading with Lucy not to move the football this time … again.

But nothing betrays the NRA’s indoctrination of Republican politicians quite like Cruz showing more balls in defending its ideology than his wife’s honor. Of course, any theater – no matter how absurd – will do, so long as it detracts from the way he abandoned Texans without electricity during that snowstorm to vacation in sunny Cancún. 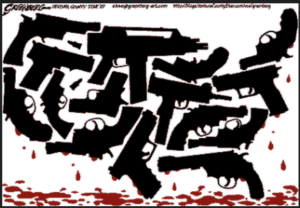 In fact, the NRA has so perverted the debate on gun control, its water-carrying Republicans are even championing the right of gun nuts to keep and bear weapons of war. In lobbying for its maximalist position, the NRA has bullied Democrats and gun-control activists into patting themselves on the back just for getting Republicans to consider ancillary (false-flag) issues like background checks. This is rather like claiming the stars, but settling for the moon, no?

Frankly, nothing validates the Einsteinian definition of insanity quite like the all-talk, no-action way politicians respond to these massacres. After all, what can be more insane than Republicans spouting NRA marketing propaganda (notably that every American has the constitutional right to purchase military-style weapons)? This, especially when those weapons carry high-capacity magazines, which are designed solely to kill as many people as possible.

On the other hand, it smacks of insanity to champion the death penalty for these mass murderers. After all, most psychos who perpetrate mass shootings are all too happy to be martyred for their cause.

Incidentally, please spare me the juvenile talk about cars and knives killing people too. If they could kill as many people as quickly and efficiently as guns with high-capacity magazines, and people were intentionally using them in as many mass killing as they are guns, I would be concerned. But there’s a reason why guns, not cars and knives, are the weapons of choice for ground warfare.

Meanwhile, it has been self-evident for years that the “NRA Cares No More about Gun Violence than Drug Cartels Do” – as I titled a commentary on June 17, 2014. Yet, Republicans remain so beholden to or afraid of its political influence, they have steadfastly heeded NRA standing orders to torpedo any gun-control legislation. This includes legislation to ban assault weapons, mandate universal background checks, or confiscate weapons from unstable relatives and friends (aka red-flag laws) – all of which enjoy considerable public support.

While I’m at it, given the insurrection of January 6, why are laws to combat Islamic jihadist so much more comprehensive and effective than laws to combat white nationalists? After all, no less a person than FBI director Christopher Wray has been on record for years warning that domestic white-supremacist groups like the Proud Boys pose a far greater threat than foreign Islamic ones like al Qaeda. This, notwithstanding that no less a person than former president Donald J. Trump spent most of his presidency playing spiritual leader to the Proud Boys, aping the role Osama bin Laden played to al Qaeda.

But I’d be remiss not to mention the media’s complicity. Because news channels across the spectrum invariably cover mass shootings like natural disasters – complete with doomsday music, heart-rending chyrons, and eye-witness interviews, all of which they know will keep viewers watching like rubberneckers gawking at a car wreck.

Nothing is more infuriating in this respect than journalists scavenging through the lunatic rantings (i.e., the manifestos and social media pages) of these shooters for insights. This, even though anyone would be hard-pressed to cite a single case where doing so prevented another mass shooting.

But I’ve already written too much about this factor too in commentaries like “Media Compounding Tragedy of Shooting Rampage at Batman Movie,” July 20, 2012, and “Massacre in Omaha,” December 7, 2007, which includes this abiding lament:

I don’t know why the media always reward these psychotic people by giving them the fame they covet; that is, by plastering their pathetic mugs all over television and on the front page of every major newspaper … worldwide, and reporting pop psychology about why and how they did their dastardly deeds. Isn’t it clear to see, especially in this age of instant celebrity, why some loser would find this route to infamy irresistible?

You’d think that – given the record of these psychotic and vainglorious episodes since Columbine – we would have figured out by now that the best way to discourage them is by focusing our attention on the victims and limiting what we say about the shooter to: May God have mercy on your soul as you burn in hell!

Some news outlets are patting themselves on the back for finally declaring that they will no longer mention the name or show the face of these domestic terrorists. This is obviously far too belated. All the same, I commend them.

Far wiser commentators have observed that only a thin veneer of civilization is preventing mankind from returning to our natural state of “war of all against all.”

But I feel constrained to reiterate my fear that it’s only a matter of time before white nationalists, like those who stormed the US Capitol, trigger avenging assaults by Blacks, Hispanics, and other minority groups (jointly or severally). And the Jim Crow 2.0 laws that state legislatures are enacting across the country, most notably to restrict minority voting rights, loom as triggering events.

We bemoan the political tribalism between Republicans and Democrats. But such racial warfare would make that tribalism seem quaint.

Until the next one then …