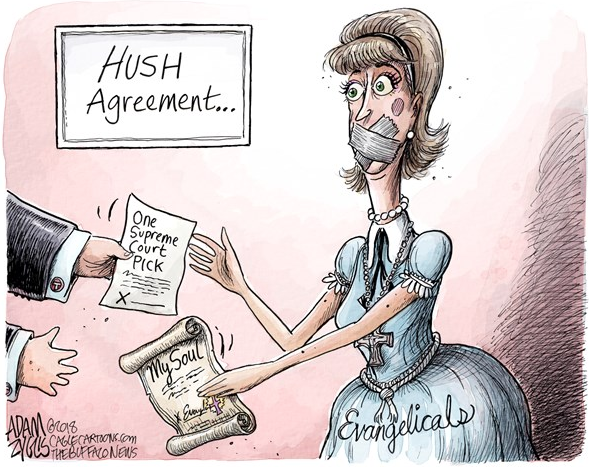 Michael Cohen, a lawyer for Donald Trump, arranged a $130,000 hush money payment to the pornographic film star known as Stormy Daniels in the closing days of the 2016 presidential campaign. The payment was to stop Daniels from speaking out about an alleged affair she’d had with Trump shortly after Melania Trump, his third wife, gave birth to their son, Barron.

With any previous president the story would have been explosive, but with this one, it felt relatively minor. The real scandal, it seemed, was that there was no scandal, because no one expects any better of Trump.

No one! Which is to say that not even erstwhile moralizing, self-righteous and judgmental evangelicals expect any better of him.

And so Trump continues to debase social mores, making a mockery of long-established standards of political conduct. But you’d be forgiven for having no clue that his most ardent supporters, those evangelicals, once proselytized those standards with Talibanic zealousness. Their silence in the face of his pathological spree of moral turpitude is deafening.

Selling one’s soul to the Devil is understandable; he’s a worthy rival of God, after all. But selling it to a two-bit huckster like Trump is just pathetic.

Meanwhile, the word “scandal” itself is falling into desuetude.