Anti-racism protesters have begun lynching statues dedicated to white racists of all types. Baying “Black Lives Matter!,” they seem hell-bent on dishonoring the legacies of those targeted for the wrongs they perpetrated against blacks during their lifetime. 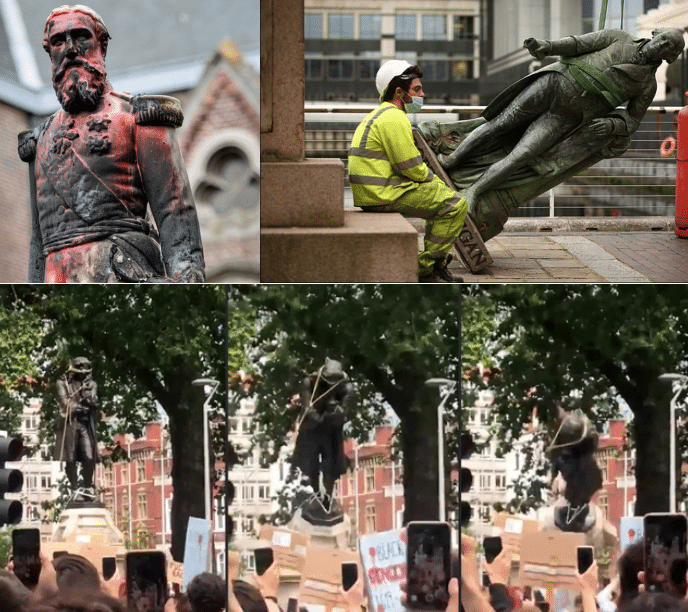 Triggered by the police killing of George Floyd … protesters in Bristol, in the south-west of England, tore down a 125-year old statue of the 17th century slave-owner Edward Colston, before throwing the monument into the city’s harbor … Rhodes Must Fall’s Oxford organizers say they’ve seen an opportunity to seize the moment and rejuvenate their cause … a memorial in London to former Prime Minister Winston Churchill was graffitied with the phrase ‘was a racist’ … a bust of Leopold was defaced in the city of Ghent, daubed with red paint and covered with a hood that read ‘I can’t breathe.’ 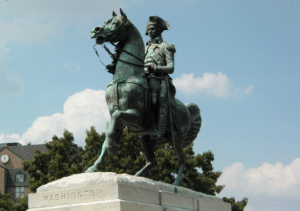 In fact, as of this writing, “Topple the Racists” avengers over in the United Kingdom have targeted 78 statues for toppling. And I suspect their counterparts here in the United States could target, if they haven’t already targeted, at least ten times as many.

But, truth be told, I fear their targeting of historical racists will have about as much impact on the legacy of racism as fleas nipping on the hides of elephants.

As it happens, I addressed, and offered a way to redress, this issue a few years ago in “White Supremacy: The Tragedy and Folly of Charlottesville,” August 15, 2017:

It stemmed from Charlottesville’s decision to remove a statue of Confederate military leader Robert E. Lee from a public park.

Similar monuments to the Confederacy litter public parks all over the United States. You will not be surprised to find the vast majority across the South. But, given the outrage, you will be shocked to find them everywhere from liberal Boston to the nation’s capital, Washington DC.

Mind you, I can think of 99 things that bother me about racism in America today, but a Confederate statue ain’t one. If challenged to resolve this dilemma, however, I would think the only politically tenable, even if morally specious, way to do so would be to focus on the Civil War, bearing in mind the following maxims: 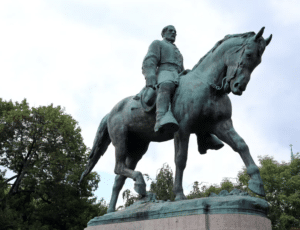 The Civil War was supposed to marginalize the racist ideology that rationalized black slavery and white supremacy. It failed. Nothing demonstrated this quite like the hundreds of monuments vanquished Southerners erected to honor those who fought and died to preserve this racist ideology. It’s particularly noteworthy that they did this in reaction to and defiance of racial advancement during the period from Reconstruction in the 1860s to the Civil Rights Movement in the 1960s (a.k.a. the Jim Crow period). They erected the Lee statue at issue in 1924, for example.

No doubt you’ve heard their descendants defending these statues and the Confederate flag as proud symbols of their heritage. Beware that they are only referring to this racist ideology, no matter what politically correct spin they put on it. I have written about the myth surrounding this flag, as well as the opportunistic outrage it occasionally incites, in many commentaries, including ‘Opportunism, Not Activism, Motivated Bree Newsome to Remove Confederate Flag,’ July 3, 2015.

So until the next racial flare-up on America’s long and tragic road towards racial truth and reconciliation – ‘in Order to form a more perfect union.’ 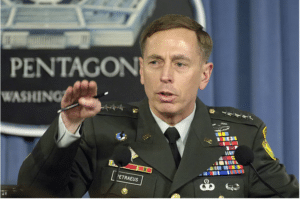 Sure enough, here we are. Except that, this time I have no less an authority than Gen. David Petraeus, retired US Army general and former CIA director, echoing what I wrote last time. For here is what he wrote for the June 9 edition of The Atlantic under the headline “Take the Confederate Names Off Our Army Bases”:

As I have watched Confederate monuments being removed by state and local governments, and sometimes by the forceful will of the American people, the fact that 10 US Army installations are named for Confederate officers has weighed on me. …

Once unreservedly celebrated figures like Thomas Jefferson, Theodore Roosevelt, and Woodrow Wilson, to name just three, held convictions and behaved in ways we now find deeply troubling. … But Confederate leaders are different from these other examples not simply in degree, but in kind: Plainly put, Lee, Bragg, and the rest committed treason. …

We do not live in a country to which Braxton Bragg, Henry L. Benning, or Robert E. Lee can serve as an inspiration. Acknowledging this fact is imperative.

So, let the dishonoring begin for all Confederate monuments.

That said, it behooves blacks in Africa and the Caribbean to fully appreciate what statues must fall pursuant to their declared solidarity with this worldwide anti-racism purge. As it happens, I can offer some guidance here too.

Because I’ve been publishing commentaries for years bemoaning the self-abnegating shame of newly independent countries throughout these regions retaining and even glorifying so many of the trappings of their former colonial masters. The titles to just a few should be instructive enough:

In other words, before lynching statues of white men and white queens, protesters in Africa and the Caribbean should prevail upon their leaders to begin systematically cutting all Lilliputian cords of obligations to their former colonial masters. And foremost in this respect would be

All else is folly.